Making brussels sprouts on a weekly basis in the winter has led to some innovation. My commitment to these tiny green cabbages has allowed me to perfect their preparation. The sprouts I served for Thanksgiving dinner were by far the best I have ever made! I was never a believer in roasting bacon in the oven but I have started doing it with this recipe. I don’t think it is any different from frying and it does save you some time caring for bacon on the stove. Roasting truly brings out the best flavor in these brussels and allows the most even cooking. This is another vegetable dish with simple ingredients where the fabulous flavor is in the choux de Bruxelles. 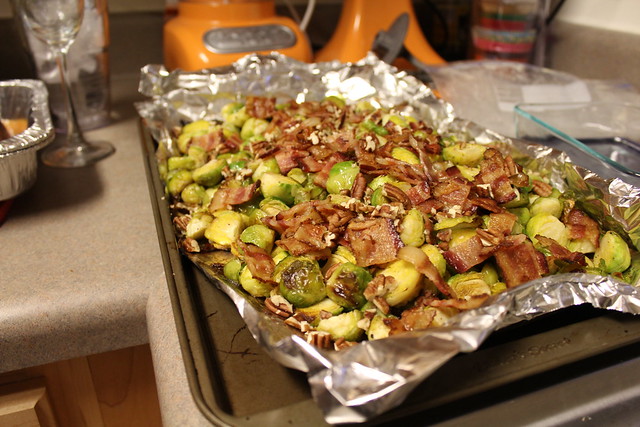 During my recent visit to Asheville I went to a bunch of breweries. It was fantastic! I was honestly losing faith in craft beer for some time. It seems that everything is starting to taste the same – super hoppy. The breweries of Asheville have renewed my excitement! I brought home a growler of Catawba Brewing Hyper Monkey Java Stout and was sad to drink the last drop. I have always loved coffee inspired beers – since my first taste of Mccoy’s Broadway Porter in KC. I love getting some caffeine with my etoh; especially when it’s not in the form of the obligatory redbull vodka. I drank this Java Stout with my Thanksgiving dinner, where I ate mostly brussels sprouts, and it was insanely good. 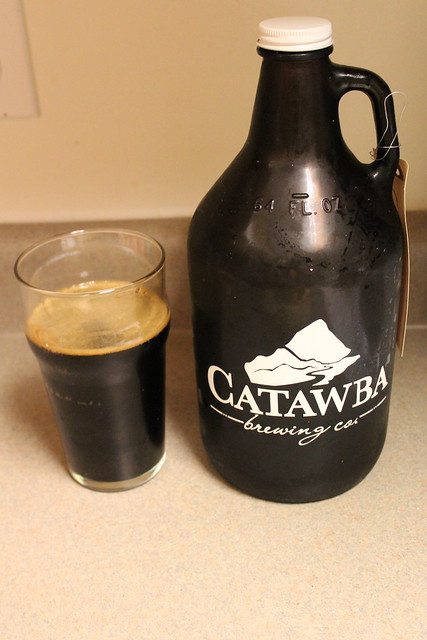 Increase the oven to 400 degrees. Using the same foil lined baking sheet, lay out the strips of bacon, allowing space between the bacon strips. Roast for 20 minutes, rotating halfway through, until bacon is slightly crisp. Remove bacon from pan and place on a plate lined with paper towels. Save the rendered bacon fat in a bowl. Throw away the used aluminum foil. Finely chop bacon after it has cooled slightly.

Increase the oven to 425 degrees. Line a baking sheet with foil. Toss the brussels sprouts with bacon fat, olive oil, salt, and pepper. Spread out over the baking sheet. Roast for 20 minutes, stirring the sprouts and rotating the pan halfway through. The brussels sprouts should be fork tender and caramelized. Drizzle with balsamic vinegar – toss to coat. Taste and add salt and pepper if needed. Just prior to serving – top with the toasted pecans and bacon.